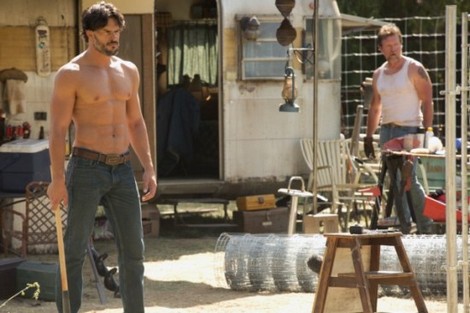 It is that time again, sit back, relax, get your bottle of True Blood out and get ready for more bloody action, True Blood is back!  We are in the countdown to the finale and there are only two more episodes left.  Tonight’s is another episode of season 5 and it is episode 11 called ‘Sunset.’

On last week’s show all the True Blood factories were blow up, the acts on the human population of Bon Temps escalated.  The VLA tried to have Rev. Steve Newlin go on television and claim that the acts on the True Blood factories were done by terrorists, but no one was really buying it.  Jason found a mysterious velum and took it to the fairies to decode it.  Much to their surprise they found out that one of their ancestors promised their first born fae girl to a vampire.  That first born fae girl just happens to be Sookie, yikes!

On tonight’s show slipping further into religious fervor, Bill (Stephen Moyer) gives Jessica (Deborah Ann Woll) an order she’s loath to carry out. Armed with a damning video of Russell and Steve, the military delivers an ultimatum to the Authority. Claude (Giles Matthey) and Maurella (Kristina Anapau) take Sookie to meet the faerie elder, who may know something about an ancient family secret. Alcide reconnects with his father; Sam and Luna hitch a ride into the Authority.

Tonight’s episode is going to be another bloody exciting one, which you won’t want to miss. So be sure to tune in for our live coverage of HBO’s True Blood — tonight at 9PM EST!  While you wait for our recap, hit the comments and let us know what you think of True Blood season 5, so far!