Jose Baez Helped Murder Mom Casey Anthony Win Her Trial, Will He Do The Same For The Victims Of Aurora? 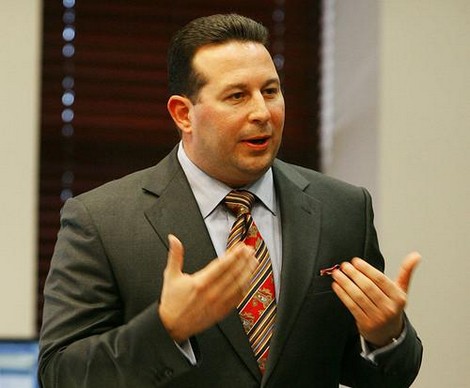 Attorney Jose Baez is one of the most famous attorneys in the world right now, after the heavily publicized “trial of the century” of Casey Anthony. TMZ reports that Baez will do some good in the world, after he lost some karma and XP points with Casey, and will be representing one of the Dark Knight Massacre victims at the upcoming trial.

Baez is representing Shirley Wygal, whose 32-year-old daughter Rebecca Wingo was shot and killed by the maniacal James Holmes. Shirley partially blames the theater for the massacre and claims the emergency exit doors should have been alarmed and that there should have been a bigger security presence at the event.

Wygal told TMZ, “When police came that night with official word, Rebecca’s baby asked, ‘How did he get in?’ Dissatisfied with the answer, she asked again. At just 5 years old, she wants to know how it could happen and so do I. If any entity had an obligation to protect the innocent and did not, then every survivor and loved one left behind must hold them accountable. The first step is a timely and thorough investigation.”

The Aurora shooting massacre was one of the worst and most terrifying shootings in US history. A string of lesser shooting events have followed ever since the event, but police say that these follow-up events are not at all related to the Aurora shooting. We can only speculate and wonder what the victims of Holmes’ must have experienced during the shootout. It has been described as the sequel to Columbine and has attracted worldwide media attention. No words and no trial will be able to express what the victims must have experienced during the final few moments of their lives. It is a tragedy of global significance and importance, which should never be forgotten.

Wygal continues, “I’ve engaged a firm large enough to help us all. I am confident in their expertise and appreciate their making this a priority. Rebecca would love these attorneys. As a mom, she’d want her girls to have the truth. As a daughter, she’d insist I find that truth for them.”

Let us know in the comments below what you think of Jose Baez. Has the media been too harsh on him for supporting Casey during her trial? Or was he merely doing his job?