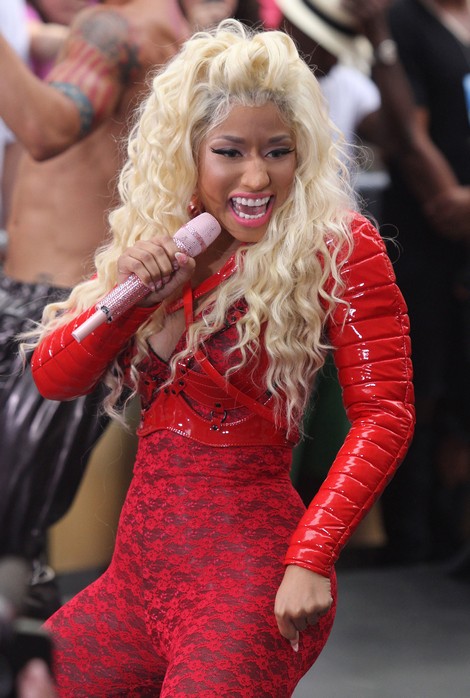 It looks like the judges table over on American Idol is slowly but surely filling up.  Nicki Minaj is said to be joining the already confirmed Mariah Carey, on Fox’s mega-hit show.  The ingénue rapper is set to be the youngest member of the elite judging panel that has included Simon Cowell, 52, Paula Abdul, 50, Jennifer Lopez, 43, Steven Tyler, 64, Kara DioGuardi, 41, and Ellen DeGeneres, 54.   The new issue of Us Weekly has more from sources close to Minaj.

“I’m not sure the deal is completely done yet, but yes, she is definitely doing it,” one insider reveals. “A few more slight things to sign off on but it is happening. She is 100% confirmed to judge American Idol.”  Of course reps for FOX and Minaj had no comment when contacted by Us.

The seat once held by Randy Jackson is still vacant as he is rumored to be moving into more of a mentoring role on the show this season.  Nick Jonas is said to be in consideration for that seat and even recently tweeted about it saying,

“I am being considered to be a judge on American Idol,” Jonas wrote. “And it would be a dream come true if it happens.”

If Jonas and Minaj both end up on the panel then it’ll be pretty clear that the producers are aiming for a much younger viewing audience.  Do you think Nicki Minaj will be a good addition to the show?  Will she give it the ratings boost that it has so desperately needed?  What about Nick Jonas?  Should the show stick with more seasoned performers and industry insiders?  Tell us your thoughts in the comments below!