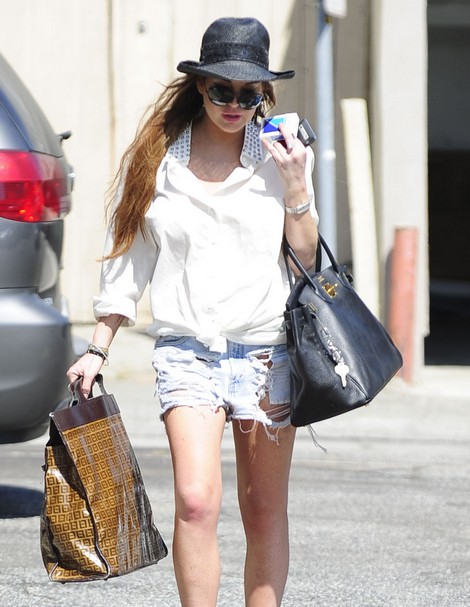 Lindsay Lohan was interviewed – not for a film or a new job at the supermarket – but as a suspect in a burglary case. On Monday morning, the police questioned the failed actress regarding a burglary at a Hollywood Hills home. Lindsay insists that she had nothing to do with it and we are giving her the benefit of the doubt, because it is uncertain whether Lindsay joined a thieving tribe of lunatics called “The Freaky Fridays”. Lindsay had a sleepover at the burgled home on Sunday, along with several other “guests”. Jewelry was reported missing in the morning. Thank God it wasn’t the Hope Diamond! That shiz nizz is bigger than Titanic’s closing scene.

The police officers were dispatched to the home and interviewed everyone in the house, including the career criminal, Lindsay Lohan. There’s no word on whether she wept or ran out the backdoor. She co-operated with the police officers, as every high profile personality should do. She has not been named a suspect, nor has there been any confirmation of Lindsay’s involvement in the missing jewelry.

Sources say that Sherlock Holmes might have always been a kleptomaniac and that he stole the jewelry to feed his kleptomania addiction. Watson was found a few hours ago, asleep in a Los Angeles elementary school, where he really, badly wanted to play with clay and crayons.

We have to ask ourselves, how does Lindsay Lohan always get involved in these scary situations? What was she in her friggin previous life, Ted Bundy? The load of karma this woman owes is more than Kristen Stewart’s debt to society.

Let us know in the comments below if you think Lindsay’s kleptomania obsession took over or whether the owner of the house merely misplaced the jewelry on their cat?