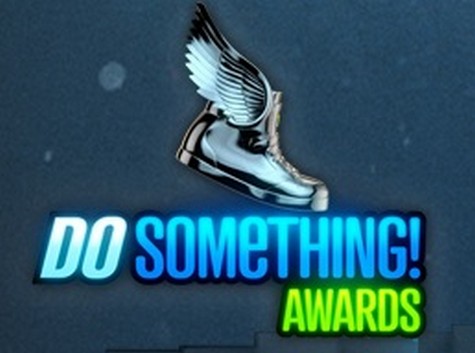 DoSomething.org and VH1 announced the winners for this year’s 2012 Do Something Awards (#DSAwards) on tonight’s telecast which aired at 9:00pm PST / EST on VH1. Hosted by the hilarious New Girl stars Jake Johnson, Emmy-nominated Max Greenfield and Lamorne Morris, the ceremony honored and celebrated the nation’s best young world-changers who represent the pivotal “do-ers” in their field, cause or issue. Celebrities such as Ben Affleck, Kristen Bell, Nick Cannon, Joel McHale, Lea Michele, Cory Monteith, Giuliana Rancic, Hope Solo and Will.i.am were on-hand to receive awards in a variety of categories from ‘Do Something TV Star’ to ‘Do Something Athlete’ for all they have done to inspire young people.

In addition to a night of celebrities, including a special tribute by Beyonce and performances by Flo Rida, fun. and house-band Kids These Days, tons of celebs made artwork backstage. You can bid on it at http://www.charitybuzz.com/auctions/dosomething until September 6. All proceeds will help dosomething.org reach more great young people!

Katia Gomez (24) of San Leandro, California received a grand prize of $100,000 for Educate2Envision. Katia grew up in a single parent home where her mother always found time and money for Katia’s education. While on a volunteer trip to Honduras, the third poorest country in Latin America, Katia saw the effects of a young population in extreme poverty, where almost half of the population is 16 years and younger and over half of all Honduras survive on only $2 a day. Katia took her own passion for education and created Educate2Envision to provide education for youth of Honduras, and show the opportunities that education can bring. Educate2Envision is working in three remote communities in Honduras where she has brought secondary education to over 450 students.

“There are no losers at the Do Something Awards – only very exceptional people doing amazing things. We couldn’t be more proud to be a part of it,” said Nancy Lublin, CEO and Chief Old Person of DoSomething.org.

“It was so inspiring to see this mash-up of incredible people from the worlds of music, movies, television and comedy sharing their personal experiences about what’s really important to them in funny yet poignant ways. I think our viewers will agree that the show on TV and online was another signature pop culture moment for VH1, and I hope that it inspires them to, well, do something, for their social circles,” said Tom Calderone, President, VH1.