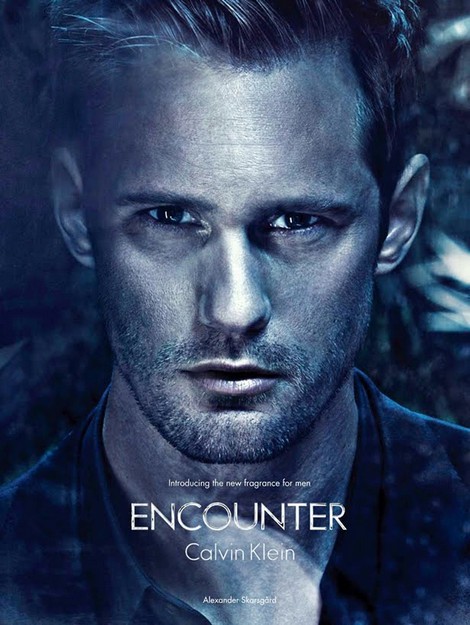 Alexander Skarsgard has been the cause of numerous heart palpitations and emergency room visits all across the world. The audiences who know Alex as Eric Northman on True Blood, have been as dedicated to him as one would be dedicated to one’s ex if one were psychotic. Alex’s face has caused a massive baby boom, with women falling pregnant at the sight of his chiseled features. What would be the Holy Grail of Alex fans? A picture of him in white briefs? A sex video? What would make fans die in front of their computers and re-post the Holy Grail to all of their Facebook friends?

We have the answer – A Calvin Klein advertisement. No, before small moans of madness escape your mouth, the man will not be dressed in white briefs made from the hair of a unicorn. In this latest advertisement for CK, Alex’s face receives all of the glory. He is presented in an icy, palpable and semi-stoic facial pose, with every line on his skin magnified and over produced. We have heard rumours of women (and men) looking at these images and muttering, “It’s like staring into the face of God…”

This new advertisement is for Encounter, a fragrance for men and Alex was chosen for his unique and chiseled facial features. He is seen in the advertisement with Dutch model Lara Stone, who resembles a new-gen Twiggy with strong facial features and an unparalleled oddity to her gait and presence, making her the perfect co-star in this advertisement.

We have a very strong suspicion that these images will be gracing the desktop wallpapers of fans all over the world. Wait, let us just download this picture and resize it to fit the desktop… There we go! We apologize for the delay, but Alex Skarsgard kind of makes us woozy, like drunken females at a male model underwear show.

Let us know in the comments below what you think of the images. 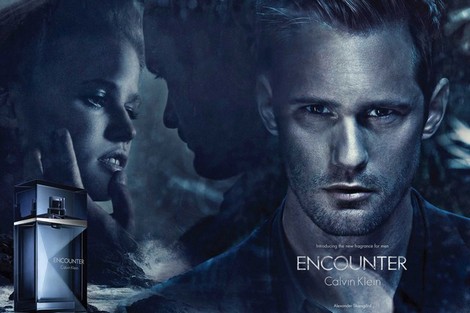