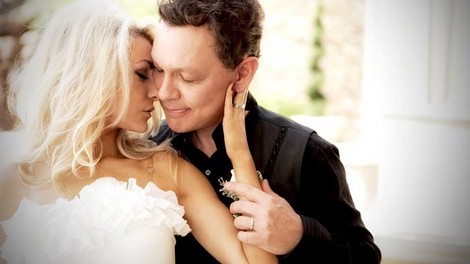 Courtney Stodden and Doug Hutchinson have ruled the headlines with their massive age gap. He comes in at 52-years-old and Courtney comes in at 16 years of age. That is a 36 year age gap, or the amount of years it takes to raise an elf. Their first reality show (everything always has to be a reality show) seems to not be focusing on their relationship, but rather having to defend it from others.

RadarOnline.com has exclusively learned that fights are breaking out on their new reality television show. Reality shows require a healthy dose of drama and Courtney and Doug are battling it out with The Dirty founder Nik Richie. (The website is like Perez Hilton, without Perez Hilton…)

A show insider reveals to RadarOnline, “Nik called Doug a child molester for marrying Courtney when she was only 16, Doug was furious with him. Doug threatened to kick Nik’s ass after he tried to insult him.”

Courtney and Doug just celebrated their first year of marriage in May, but they have been lambasted by social critics for their unconventional marriage. The age gap has raised eyebrows the world over. Allegedly, Doug felt “he just had to defend himself and his wife for the uncalled for remarks.” This is the reason he has been experiencing so many antagonistic fall outs with Nik Richie.

The insider source reveals, “People on set said that Doug got mad when he heard Nik making fun of Courtney and didn’t want to let him get away with it.” Nik was labeled as “pathetic” by Doug and allegedly, these two will be throwing down some major drama this season.

What do you think of this marriage? Do you think there should be a place in society for such a massive age gap, or is it merely a cry for attention? Your thoughts and comments are welcome below!