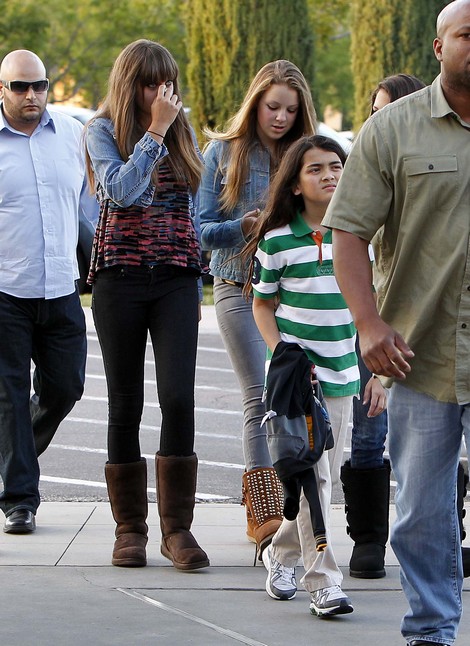 It looks like the Jackson family drama over who will retain custody of Michael’s kids is winding down.  A judge is now expected to grant joint guardianship to family matriarch Katherine and TJ Jackson.  Katherine originally was granted sole custody of Prince, Paris and Blanket but then raised concerns when she disappeared for eleven days back in July.  She was supposedly whisked away to visit her daughter under mysterious circumstances  and at the time TJ, 34, was appointed a temporary co-guardian by Superior Court Judge Mitchell Beckloff in the wake of Katherine’s trip.

All sides seem to have reached an agreement regarding dual guardianship and the kids are fine with it as well. Katherine’s attorney, Perry Sanders, released the following statement yesterday,

“It was agreed by all that it is in the best interest of Mrs. Jackson and the children to file a modified joint pleading at the beginning of next week. With some changes, that pleading will essentially now legally reflect how Mrs. Jackson and TJ have often shared responsibilities of raising the children since Michael Jackson’s tragic passing.  Following reaching agreement, Margaret Lodise, the court-appointed guardian ad litem for the children, was brought into the meeting by conference call. Ms. Lodise confirmed with Prince that the agreement reflected the wishes of all the children.  The joint filing will request that the court reinstate Mrs. Jackson and appoint TJ as a co-guardian of Michael’s children. If the court grants this joint request, it will eliminate concerns such as the ones triggered by the events of the last few days. It will also empower TJ to take joint legal responsibility for certain day to day duties such as the management of household personnel, including security.”

It’s good to see both sides of the family working together to benefit the kids and it’s even better to know that they also approve of this arrangement.  Do you think having both adults as co-guardians will be the best decision in the long run?  Tell us your thoughts in the comments below!