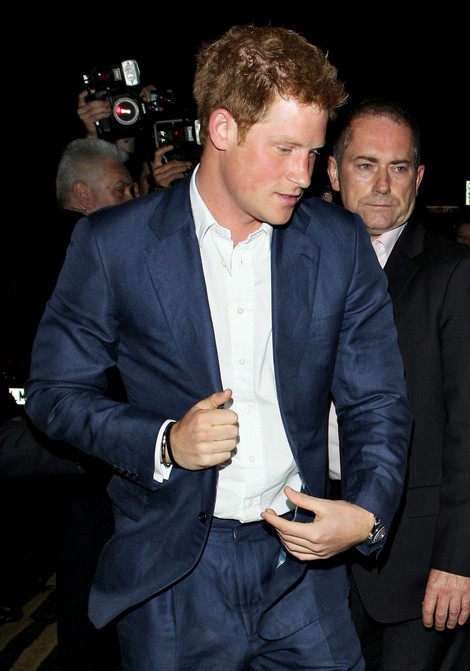 Prince Harry who is no stranger to scandal was caught naked.  Harry was partying like 1999 in Las Vegas and playing strip pool.  Apparently, Harry was with a bunch of friends and decided to party hardy and the boys picked up a bunch of girls and headed to their VIP suite for some fun and games.

TMZ has the exclusive on the story: Once in the room, things got WILD … with the group playing a game of strip pool that quickly escalated into full-on royal nudity.  Some of the partiers snapped photos of the madness. In one photo, a fully nude Harry cups his genitals while a seemingly topless woman stands behind him.  In another photo, a naked Harry is bear-hugging a woman who appears to be completely naked as well.

I think Harry is in BIG trouble, his grandmother the Queen is not going to be pleased.  Just when London has received so much positive press after the London Olympics and Kate and Prince William have had such a positive effect on people’s opinions on the monarchy these photos come out.

I see little Prince Harry being called back to London stat!  What do you think of the naked pics of Prince Harry.  Boys will be boys or shameless?  You can see the photos at TMZ here!  Hit the comments and let us know your thoughts!