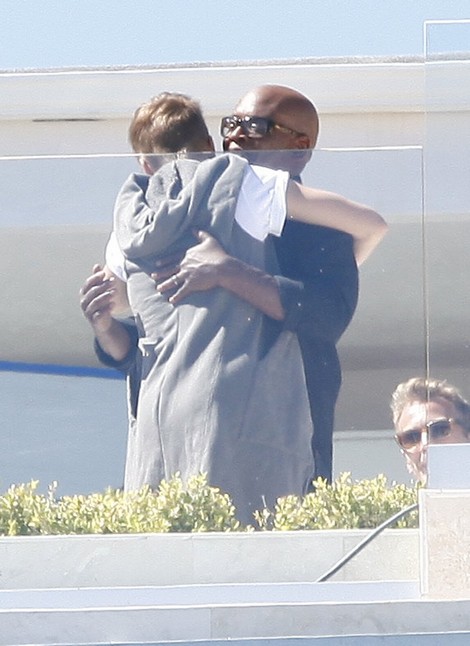 L.A. Reid and Justin Bieber share a bit of history as it is Reid that signed Bieber to Island Def Jam records back when he was Chairman, now it appears that the two will work together on X Factor U.S.  Reid has tapped Justin to be his guest mentor, someone to help him in choosing contestants who will perform in the show’s live episodes in 2012.

New photos  have surfaced of Bieber’s appearance on the show. The photos, taken on August 27th, show Bieber and Reid outside with some of this year’s “X Factor” contestants on the roof of a building in Los Angeles. The group was filming the “judges’ houses” phase of the competition, in which the Top 32 acts of the year are narrowed down to the 16 acts that will compete in the show’s live episodes. Those episodes will begin airing in October.

It’s going to be interesting to see how well Justin actually does in this mentoring position. Reid has an older group of singers, ages 25 and up.  What kind of advice can a kid Justin’s age really give them? He may relate as a singer but as a person the age difference is massive and it will definitely affect how they interact.

A wise choice for guest mentoring this year is Nick Jonas who will be assisting Demi Lovato.  They are working with the 12-16 year olds which is perfect. They are older and wiser and really can guide the kids.  They’ve been there.  Unfortunately, when Beiber is looking at a 29 year old that is struggling with god knows what, he just won’t be able to help.

Am I wrong? Do you think that Justin will work well with Reid?  Tell us your thoughts in the comments below!