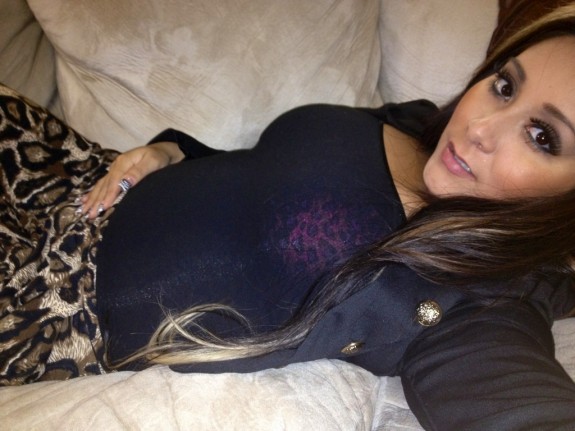 Nicole ‘Snooki’ Polizzi has revealed to her followed that she has decided to breastfeed her newborn son Lorenzo Dominic LaValle whom she welcomed to the world on Sunday morning in New Jersey. The reality TV star has been sharing her love for her son ever since giving birth on Twitter, but hasn’t posted any pictures of him yet, most likely because she’s already scooped a magazine deal for exclusive pics.

Whatever the case may be, it seems that Snooki is turning out to be a great mother. She doesn’t seem to be holding back one bit now that she’s taken on the role of motherhood – she’s even decided to start breastfeeding her little one. Let’s just hope Lorenzo isn’t drinking alcohol from her breast. Ha. We’re kidding on that one.

“Lorenzo is even cuter today. #imsolucky,” she wrote on her page. When asked if she had started breastfeeding Lorenzo by a fan on the social networking site, she responded: “I love nursing my little man!,” before adding: “All the pain and anxiety is so worth it!!! Xoxo”

Snooki is currently filming JWoww & Snooki with her friend Jenni ‘JWoww’ Farley. Expect some serious ratings on the show!