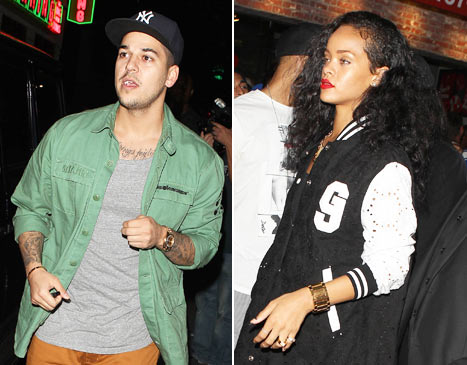 Friends with benefits, perhaps? Ha. Rob Kardashian has told Ryan Seacrest that he’s definitely not in a relationship with Rihanna nor Rita Ora who have been spotted in Los Angeles several times, while Rob was also spending a lot of time with the singer when he went to London with his sister Kim Kardashian in May.

The reality star recently went to a friend’s birthday party, when all of a sudden Rihanna showed up – according to him, she is a friend to to his friend (hopefully that didn’t confuse you) and Ri has been pretty cool with Rob for a long time. The two, plus all of the guests that showed up, were treated to a night at a go-karting course before heading elsewhere in Burbank.

Speaking to Ryan Seacrest on KIIS-FM, Rob explains: “Rihanna’s a friend, and she is friends with my friend Capricorn and it was Cap’s birthday,” he explained. “It was a little birthday thing. And then we all went out to celebrate her birthday. It was fun, it was a good night,” before adding that he is also not dating Rita: “Rita is in the UK, I’m just a fan,” he said. “I’m a big fan… She will be in town for the VMAs. I’m a fan, I’m a fan. Seriously, though, I wish you could buy UK albums here.”