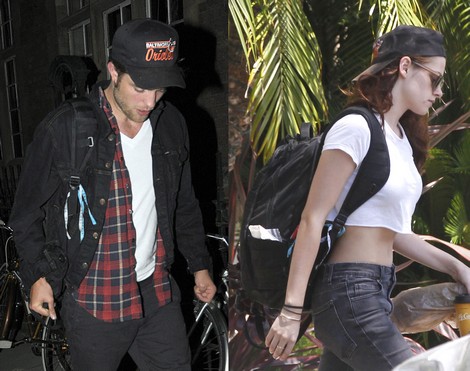 Robert Pattinson has not had much contact with Kristen Stewart since her affair with her Snow White & The Huntsmen director Rupert Sanders.  Rumor has it that the two finally had a parlay on the phone for over one hour.  Now a close friend is claiming that Kristen finally wore Robert down and he has agreed to a face to face meeting.

Where better, to have such a meeting, but at Robert’s pal Reese Witherspoon’s Ojai ranch.  Robert hid out at the ranch when news of the affair first broke, because it is difficult for the paparazzi to spy there.

Reportedly  Robert is starting to feel sorry for Kristen because she has taken so much flack over the affair.  He especially felt bad when he saw that there were t-shirts being sold with the logo ‘Kristen is a Trampire.’  Will Robert take Kristen back? Probably not!  Can they be friends?  Maybe, but doubtful!  Let’s not forget that Kristen was caught making out in a car with Rupert and Robert was totally humiliated when he saw the photos in a magazine.  The least she could have done was call him and warn him.

What do you think should Robert take cheating Kristen back?  Hit the comments and let us know!