Jennifer Lopez To Extend Her Family As She Reveals She Wants More Children, But Will It Be With Casper? 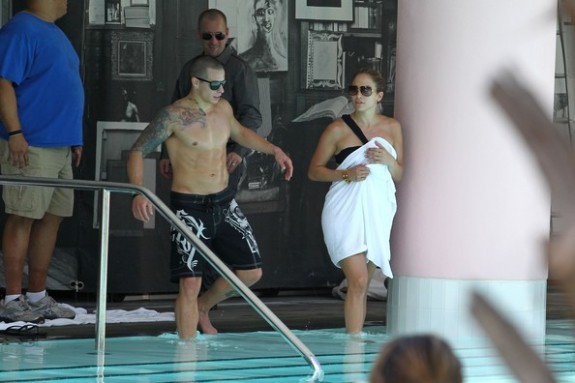 She’s already made one bad decision this year – leaving American Idol – so let’s hope she’s not making another one. Jennifer Lopez will definitely want to have more children in the near future, admitting that she hasn’t closed the doors to extend her family just yet. The singer who already has two children from her previous marriage to Marc Anthony, is currently dating Casper Smart and although she says she wants to welcome another child to the world, she didn’t exactly reveal from who.

“I haven’t closed shop in that department,” she said. “I don’t know, [we’ll] have to see – we only have so many years that you can do that. I am a lover. I mean, at my core I feel like that’s such a big part of my personality – and a part of why I do what I do – because I have so much to say on that subject. I feel like that’s what my life is about.”

Lopez shocked Hollywood last year when she announced she will be filing to divorce Marc. However, while many may think that these two may not be getting along anymore because they are no longer together, they are mistaking because Jennifer says, Anthony and herself are still in great contact and only want what’s best for their two children, Max and Emme.

“Obviously something wasn’t perfect,” she said. “But the truth is that there’s love there. We were great friends first – and we have two babies. The main goal is to just not mess them up, to really make them OK and be sure that we are what we need to be to them first. You go second in that equation. Our feelings and our struggles and whatever we had going, kind of comes second — and the love that we share in common for those kids comes first.”

J-Lo finished her North American tour with Enrique Iglesias yesterday. We wonder what her next projects will be – but we’re hoping it isn’t acting because it’s not exactly one of her strong points.