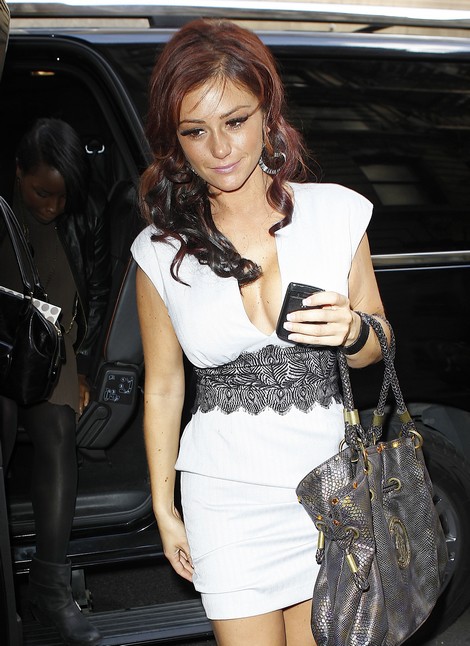 It looks like another Jersey Shore cast member has been keeping a secret for awhile but now the cat is out of the bag!  Jenni “JWoww” Farley and Roger Matthews are engaged and have been for awhile! The couple has been on and off for over two years now and currently things seem to be going well. A source at the NY Daily News confirms,

“[Farley] has been engaged [to Matthews] for a while,” one source close to “The Jersey Shore” cast reveals, although the insider can’t say when Farley’s 37-year-old boyfriend popped the question. Producers are making her save it for filming,” says the source, referring to the second season of the “Snooki & JWoww” show, which started taping this August. But the source warns, “[Farley] and Roger are always on and off.”

This is one of those couples that kind of confuses me. She has such a bad temper and flips out whenever she doesn’t get her way and he rarely seems to care about much of anything.  They seem to have little in common besides their mutual love of the gym.  There must be something real there though because they always end up back together and Jenni credits Roger with every positive change that she has made in the past few years.

Will they make it down the aisle or will another big blowout end things once and for all?  Do you think seeing her best friend Snooki settle into a more domestic life has rubbed off on Jenni?  Could there be a baby in her future too?  Tell us your thoughts in the comments below!