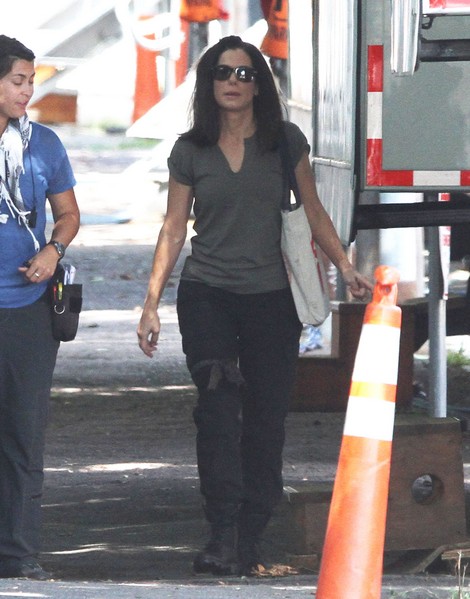 It was back in 2010 that Sandra Bullock learned that her then-husband, Jesse James was a scumbag to the millionth power. Not only was he cheating on her with a ridiculous ELEVEN women, but he also was a brazen racist that owned Nazi memorabilia. He was scorned and vilified in the media but eventually the dust settled and it seemed fair to see him escape so easily- until now. James was recently hired for an acting gig on Sons of Anarchy, the FX show revolving around a biker gang.  It seemed a good fit until series star, Ron Perlman, got wind of James’ hiring and had a fit. The Jewish actor knows of James’ history and wanted no part of anything he touches.  The National Enquirer has more about Perlman’s reaction,

“Ron is a professional, drama-free, no-nonsense actor, but when he heard that Jesse had been cast, he went through the roof. Right in front of the cast and crew he said that Jesse had a Nazi stig­ma attached to him and that he’d walk if Jesse was given a part on the show.”

One more person is happy to see James lose the role- his ex.

“Sandra believes this is karma for Jesse – what goes around, comes around,” said a source close to the 48-year-old Oscar-winning actress. She’s not going to badmouth Jesse publicly, but she’s happy that his sor­did past is causing him problems. Jesse betrayed her and broke her heart, so she doesn’t feel one bit sorry for him. Sandra has even told friends that it feels good to know Holly­wood has her back.”

Do you think it’s right that James’ personal leanings are now quite obviously affecting his career?  Can you blame Perlman for not wanting to be affiliated with him, especially considering how some of James’ actions may have personally offended him?  Has karma finally caught James by the toe?  Tell us what you think in the comments below!