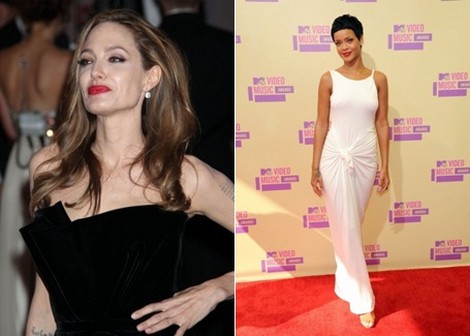 The bizarre hate-triangle that is Brangelina (Brad Pitt and Angelina Jolie) + The Golden Couple (a title earned by Jennifer Aniston and Brad Pitt back when he still groomed and had hair like Adonis) has been working overtime since everyone got engaged to everyone else. Shortly after Brangelina announced their engagement, after we all stopped whispering “finally!” to the person sitting next to us, Jennifer jumped out, yelling, “I’m engaged too! To Justin Theroux. He’s great. We love each other. I’m not alone!” (Okay, not really, but were the people of the world in a theatre, and they were the play, that’s how it would look. All the world’s a stage, remember.)

We have been updating you on each couple’s wedding plans: from Jennifer’s condition that Justin get a nose job, to Brad confirming the wedding with Angie, but it seems like one wedding may be all for show! A conversation between Angelina and Brad’s mother Jane was recently paraphrased by an insider at Star:

Jen has been over the moon since her Aug. 10 engagement to Justin Theroux, but arch-nemesis Angelina doesn’t have any messages of support for the former Friends star. Angie said, ‘Please! She’s pathetic! But, hey, it’s about time. Sure hope it lasts, but don’t get your hopes up. Justin’s going to dump Jen,’” revealed the insider.

Wowza. Them’s fighting words! I wonder if that conversation happened though. I’ve always had the impression that Angelina isn’t particularly close to her mother-in-law, especially after she wrote that awful anti-gay letter! Whether Angie said it or not, I’m pretty sure it’s true. Jen looks so desperate, always one step behind Brangelina. She’s been demoted to the B-class, off season romantic comedies, and now she wants to project this whirlwind romance. Let’s just say, I’ll believe it when I see it!