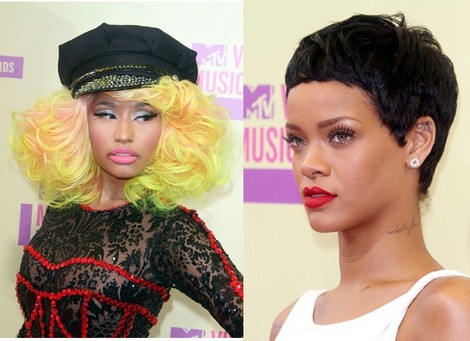 Yikes, wonder what is up with these two?  It looks like there is a war brewing between Nicki Minaj and Rihanna.  At the 2012 MTV Video Awards last night September 6th, 2012 Nicki delivered a huge snub to Rihanna in front of the audience.  Nicki won the award for Best Female Video for Starships and when her award was announced, Nicki went to go on stage and Rihanna stepped up and  wanted to give her a hug.

Well that is where it all went down – Nicki basically told Rihanna to sit down and get out of her way.  At least according to reality TV contestant and Playboy model Trishelle Cannatella.  She tweeted on her twitter account the following:

Totally strange, you would think Nicki would be okay with a congratulatory hug.  Wonder what Rihanna did to piss Nicki off.  What do you think, is Trishelle telling the truth, or stirring up the pot?  Hit the comments and let us know your thoughts!