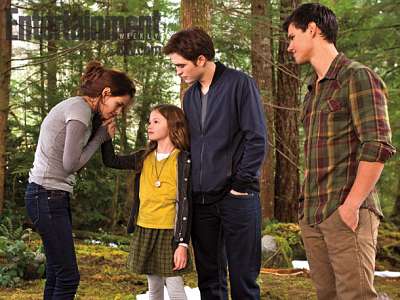 Okay it was kinda weird tonight at the 2012 MTV VMAs. Robert Pattinson with other members of the Twilight cast presented a new teaser trailer for Twilight Breaking Dawn Part 2.  Now that was not the weird part, the weird part was Robert’s co-star Kristen Stewart was nowhere to be seen.

Actually Kristen was in Toronto for the Toronto Film Festival (TIFF) promoting her new movie On The Road.

This is the end of the Twilight Saga movies and I am sure that the powers that be are glad.  With the Kristen Stewart cheating scandal with Rupert Sanders fresh in everyone’s minds it is questionable how this movie will actually do.

Many people are starting to suspect that the Robert Pattinson and Kristen Stewart romance was just a showmance to promote the movies.

Anyway, the new clip is below and in it the vampires are preparing for a fight with the Voltari and Bella (Kristen Stewart) leads her daughter Renesmee (Mackenzie Foy) to safety.  Check out the video below and let us know what you think!