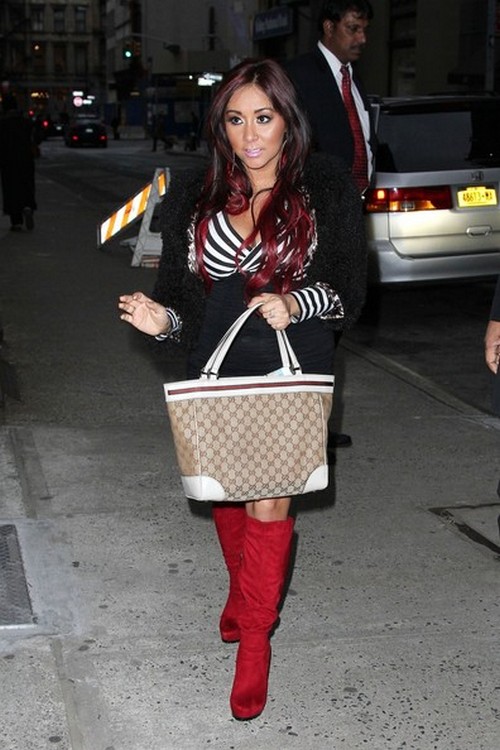 Snooki is and always will be the crazy one, right? The reality star, who was behind the reason the show got canceled – explained how she gave birth to her newborn son Lorenzo Dominic LaValle. According to the 5″ former cheerleader, she wanted to look nice and not dull as she would call it – but that wasn’t all… wait for the bizarre question she asked the people in the room.

“Does he look cute?” is the line that came out of her mouth when Lorenzo’s head had popped out. Isn’t that crazy? She probably didn’t feel any pain from the birth experience,- but nevertheless, we don’t have any evidence that she was not under the influence of drugs. Ha. A source had told People: “She did her make-up in the delivery room!”

While Snooki also explained to the mag: “Before I was pushing I put on bronzer and false eyelashes. I wanted to look pretty for him. When the head was out, I was asking everyone if he looked cute – and he’s adorable. I was crying and just said, ‘I love you so much’.”

“It feels like we have a new best friend and we’re hanging out. We didn’t expect it to be this much fun. Everybody said, ‘What’s going to happen with your career?’ And here’s the part we don’t believe: “I was like, ‘I’m having this kid. If it ruins everything, I’ll get a normal job from 10 to 5’. I didn’t give a s**t.”

Good luck with that job Snooks, because that money from Jersey Shore will soon run out, honey boo boo.