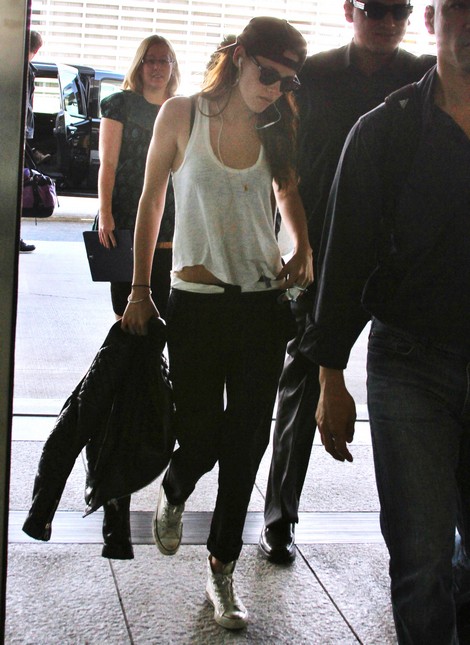 It seems that Kristen Stewart is not in a good mood lately, boo hoo.  The trampire is not pleased that everyone is hating on her since she cheated on Robert Pattinson with Rupert Sanders.  In fact, Kristen was in a real bitchy mood as she caught a flight out of Toronto.  Kristen was in Toronto attending the 2012 Toronto Film Festival (TIFF) in Canada.  We caught up with her today (September 9, 2012) as she was heading home.

As she negotiated through the crowds grumpy Kristen growled at her bodyguard, ‘Don’t F*!king Touch Me Dude’ when he tried to help her through the crowd. Not nice, Kristen – Maybe she can call Sandra Bullock’s ex Jesse James and find out how he dealt with being the most hated man in America.  It seems Kristen now has the title of Most Hate Women In America!

Kristen who is still in denial after her break up with Robert was seen wearing his sweaty Baltimore Orioles hat at the airport.  Kristen told reporters at TIFF that all is fine with her and Robert.  Ya right….. she wishes!

Click on the thumbnails below to enlarge 8 additional photos of Kristen leaving today!