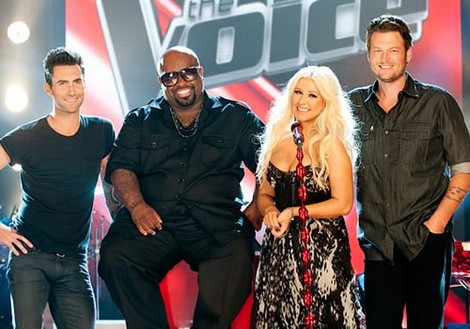 Finally after a long wait The Voice returns to NBC tonight with the premiere of season 3. In the season premiere, the “blind auditions” are held in front of the celebrity panel of coaches including, Christina Aguilera, Adam Levine, CeeLo Green and Blake Shelton, who each hand pick vocalists for their individual teams.

The strongest vocalists from across the country compete to be selected by one of the coaches and fight for a chance to win the title of being named “The Voice.” Christina Milian serves as Social Media Correspondent and Carson Daly hosts.

There is a twist this season – coaches can use a rule called the Steal, which allows them to snag up to two contestants from opposing teams.

As usual the show’s innovative format features three stages of competition: the blind audition, a battle phase, and finally, the live performance shows.

Tonight’s premiere is going to be and exciting one, which you won’t want to miss. So be sure to tune in for our live coverage of NBC’s The Voice – tonight at 8PM EST!  While you wait for our recap, hit the comments and let us know how excited you are about the new season of The Voice.