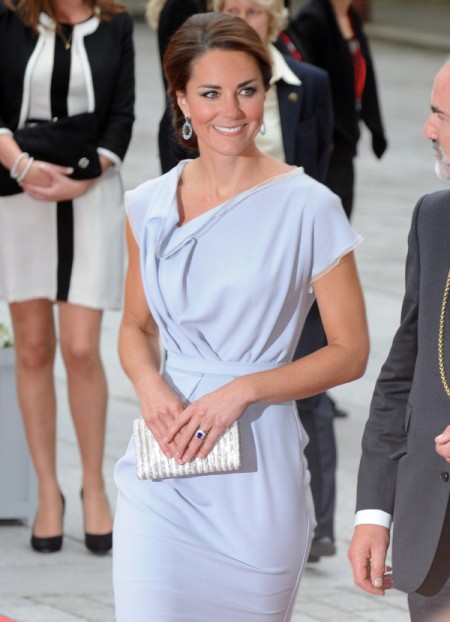 Kate Middleton is keeping the is she or isn’t she tongues wagging as she avoided a glass of wine in favor of water at a state banquet in Singapore today. Tom Sykes at the Daily Beast reports Kate kept the alcohol at bay during two toasts to the Queen. Prince William had no such repugnance for the nectar of the Gods. He reportedly put it back with gusto.

So, is Kate Middleton pregnant? The tabloids have been awfully loud lately about the rumors and Sykes writes, “the Royalist has been hearing unconfirmed rumors of late from the Royal circle that Kate is pregnant, with one source saying that Kate was pregnant, but that William and Kate were planning to hold off announcing a pregnancy for ‘as long as possible.'”

As much as I want to believe she is, the wine drinking is not proof enough for me. Kate rarely drinks in public, if at all. In fact, the only time I’ve ever seen her with a drink in her hand was during the pre-Olympics reception at Buckingham Palace in late July. I guess that was a whole month ago and a lot can happen in that time but that would be a quick turnaround. I think Kate keeps it sober at events because she can control issues. She weighs next to nothing so alcohol probably hits her quick. The last thing she wanted to do was show up in a foreign country on behalf of the Queen fumbling all over the place after a few lovely glasses of Chardonnay. And she likes to keep her weight down. Drinking lowers willpower and Kate can’t be having that. God forbid she let herself indulge in some chocolate!

So I can’t go there. I’m thinking we have a few more months before we get any telling evidence. She’ll have to throw up all over a diplomat à la George Bush for me to recognize it’s morning sickness. Sorry! I just need more proof!

What do you think the likelihood is that Kate’s pregnant? Is shunning wine proof enough for you?