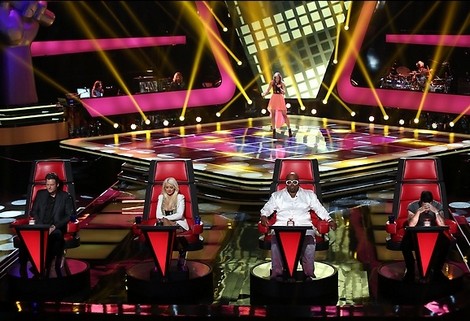 Tonight on NBC premiere week continues on The Voice.  It is the season 2 blind auditions part 2.  The coaches continue their quest to find the best singers for their teams.  If you missed last night’s Part 1 of the Blind Auditions you can read our full and detailed recap here!

On last night’s show the premiere ratings were down substantially from the season 2 premiere but up from the season 1 premiere.  But it still opened with a respectable number 4.1 rating/11 share in adults 18-49.  The show opened last night with an ecstatic rendition of a Rolling Stones classic by the judges.  The new season has allowed the producers to bring in a brand new twist called the “Steal”, where one judge is able to steal two contestants from a rival judge.

There were great singers, there were good singers and there were some average singers, but as per usual, the chairs swung around and the fates of a few were in the hands of Christina Aguilera, Adam Levine, Cee Lo Green and Blake Shelton.

Tonight’s premiere is going to be and exciting one, which you won’t want to miss. So be sure to tune in for our live coverage of NBC’s The Voice – tonight at 8PM EST!  While you wait for our recap, hit the comments and let us know how excited you are about the new season of The Voice.  While you wait for the recap watch a premiere sneak peek below!