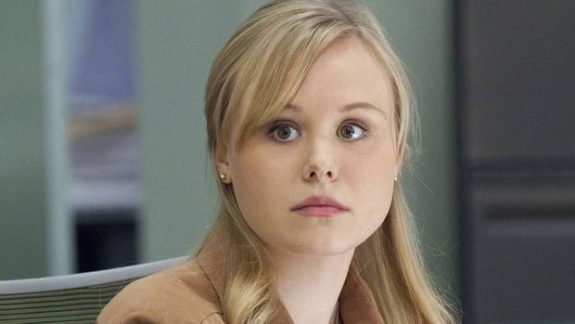 The character that Alison Pill plays on HBO’s The Newsroom might just be rubbing off on her. The 26 year old Canadian actress seemed to take a page from “Maggie Jordan’s” klutzy book this morning as she accidentally tweeted a topless photo of herself for her 13,000 Twitter followers to see. In a truly rare twist, Alison didn’t even try to pretend that it didn’t happen. Instead, she acknowledged the naked faux pas in a tweet saying,

“Yep. That picture happened. Ugh. My tech issues have now reached new heights, apparently. How a deletion turned into a tweet… Apologies.”

Now Alison, haven’t you learned from the bazillion celebrity women before you? If you take naked pictures they will turn up somewhere, eventually. They always do, although I have to hand it to her, I don’t know of anyone posting their own photo by accident before! Instead accounts are hacked, cell phones broken into, etc. Learn your lesson honey!

Jay Baruchel, probably the guy that Alison took the photos for in the first place, joined her in laughing off the blunder via twitter as he posted, “My fiancee is an hilarious dork.#imjustgladitdidnthappentomefirst. Smartphones will get ya”

Did you catch Alison’s photo?  Do you like the way she handled the mistake? Tell us in the comments below!