Heidi On Her Relationship To Seal: ‘We’re Not The Greatest Friends’ 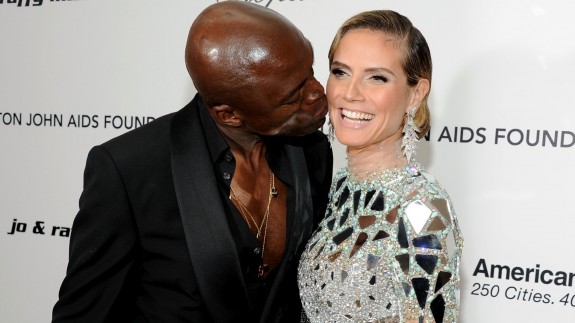 While many of us had thought that this couple were made for each other, and would last a lifetime… they didn’t. Ha. And now that the divorce is being finalized and the custody settlements are being brought out, the claws are out and Seal is not letting anything stop him. While recently talking to TMZ, the singer had said that Heidi Klum could have been more classy, before moving on to the next one, seeing as the couple hadn’t even been divorced yet.

While Heidi quickly shut these rumors down, along with a friend adding that Seal was just bitter about the divorce, Heidi has now spoken out about the whole situation and her relationship with Seal on Katie Couric’s new talkshow. The German model had explained that she and Seal are certainly not the best of friends as of right now, but they do see each other every now and then:

“I don’t know if we’re the greatest friends right now, especially because of the things that he said,” she explained. “I just saw him on Sunday. We were talking and we’re in an okay place.”

She continued that moving on from a failed marriage to whomever you marry can be very hard. She told Couric: “It’s hard, especially when you are in the public eye too. People are always looking at you closely and at everything you do. And they also don’t always see exactly how it really is. I haven’t felt like correcting every rumor that is out there. I’m focusing on moving forward.”