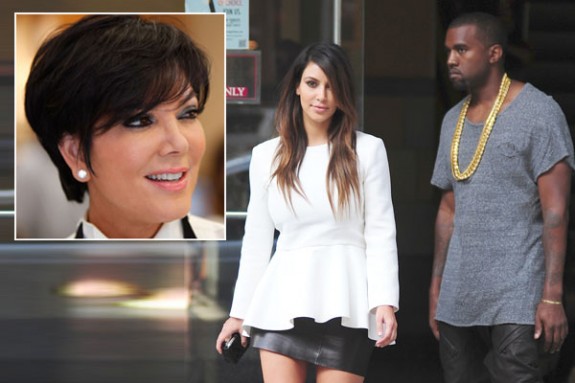 Kardashian drama!! Kris Jenner has reportedly banned Kanye West from ever talking about Kim Kardashian’s sex tape again – ever. Kris is supposedly livid about the fact that the rapper is bringing up something that Kim and her mother have tried to get over for so many years, despite the fact that Kim made $5 million from the tape in the lawsuit she filed.

Jenner heard that Kanye had been mention the tape in SEVERAL of his new songs, while one of his single hears the rapper say his girl became a superstar… all from a home movie. “Eat breakfast at Gucci / My girl a superstar all from a home movie.” Not to forget, in another recent leak of one of his songs, he refers to Kim as being his “perfect bitch” which caused Bruce Jenner to talk to Kim and have a word on how he’s phrasing his words.

According to RadarOnline, a source had told them: “Kris had stern words with Kanye when she saw that he said he would put Kim’s sex tape on while romping with other women.” The source added that Kris doesn’t want bad things of the past to be mentioned and brought up again for useless reasons.

Meanwhile, Kim is heading to an unknown location, supposedly with Kanye as the two open a new DASH store and do some other exciting things – like kiss, and start drama, and make up. Kardashian is taking the camera crew with her to film the spinoff show, which is most likely going to be calle ‘Kim and Kanye Take…’. By the way, West has lost our respect. Ha.