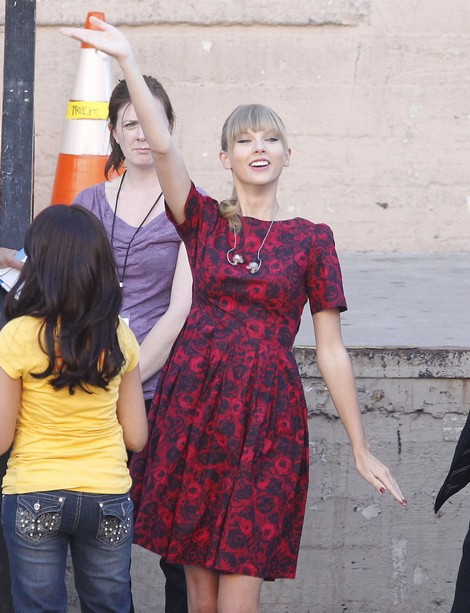 It looks like Taylor Swift’s dream of becoming a welcome fixture in the Kennedy family is dying a slow death as the majority of the Kennedy women can’t stand the young country star.  Taylor has been dating Conor Kennedy for a few months now and she was already receiving a chilly family reception BEFORE turning up a family wedding uninvited. Since then her likability has completely plummeted and the latest person to jump on the bandwagon is Cheryl Hines, girlfriend to Conor’s dad, Bobby Kennedy.

According to The National Enquirer, Cheryl joins Maria Shriver and Caroline Kennedy in wanting to get Taylor banned from the family compound in Hyannis Port.

“Cheryl is convinced that Taylor is bad news all the way around for the Kennedy family. She warned Bobby that Taylor is just using Conor to make herself more famous and that she’s going to break his heart. But what really ticks Cheryl off is how flirty and helpless Taylor acts whenever she’s around Bobby. Deep down she believes Taylor only made a play for the son so she could get to his father.”

Do you think that Taylor’s set her sights on an older Kennedy man and is using the young ones to angle her way in? Before dating Conor she was rumored to be hooking up with Patrick Schwartzenegger which certainly explains why Maria Shriver hates her! Girl code usually does include not swinging from the branches of a family tree in order to get a date!

Will the Kennedy women get their way and bust up Swifty and Conor? Tell us your thoughts in the comments below!