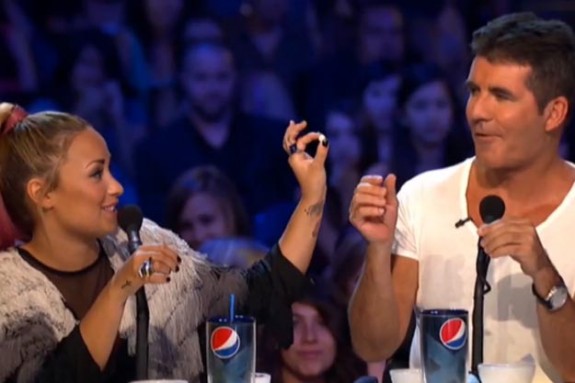 Simon Cowell has explained why he had hired Demi Lovato fill the fourth seat on the judging panel of X Factor USA. The music mogul, who also hired Britney Spears for the job, had been on a promotional tour for the show with Britney to get the excitement going – since there was no denying that many people had been eager to see what Brit would bring to the table. And she held her own in our opinion.

Whilst speaking with YoungHollywood, Simon had explained that hiring Demi was a very good decision for the show because she has the ability to mix with the younger audience who audition for the show, while also knowing the music industry very well. It can eat you alive if you’re not strong enough, and she’s definitely faced that situation before when she headed to rehab for battling an eating disorder.

Cowell, who has grown to love Demi not only a co-worker but also as a friend, told the blog: “I like the fact, with Demi, that she was this sort of Disney product who went bad, and knows that she went bad. [She] sorted herself out [and] came through the other side stronger than ever. I found her interesting, and I think we’ve got her at absolutely the right time.”

X Factor continues on Wednesday on FOX! Have you been watching?!