Melissa Gorga’s (Maybe) Stripper Past is Catching Up With Her 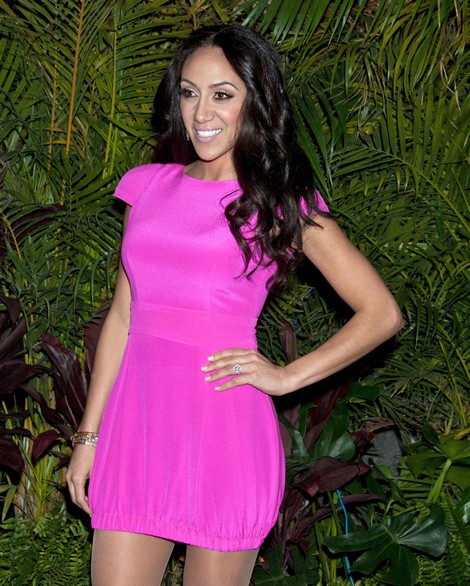 It has been a pretty calm season for The Real Housewive’s of New Jersey’s Melissa Gorga, at least until this week. Up until now her marriage was rock solid, her family was good and she and sister-in-law, Teresa Giudice seemed to have called a truce in their long-running feud.  At the root of that fight was Teresa’s insistance that her brother Joe had married a stripper. Calling Melissa that caused a huge rift in the family and on this weeks episode, Melissa is pretty sure that while Teresa has played nice to her face, she has worked behind her back to set her up. Radar Online has a bit of a sneak peak,

“It all starts when Angelo Voorhees, a salon PR manager, approaches Kim DePaola and Teresa while they are getting their make-up done. Filmed back in September 2011, the ladies were getting glammed up to attend the fashion show for Kim D’s boutique, Posche. The ladies appear stunned when Angelo says: “I must say Teresa, it’s actually a small world we live in. I know your sister-in-law Melissa. We go way back… She actually worked for me. At a little gentlemen’s club in Elizabeth.” Asked what she did Voorhees says: “Well, she danced for me.”

That simple exchange sets the stage for a family sized blowout that leaves Melissa coming face to face with Angelo and her husband, Joe, being accused of shady business dealings.  Melissa firmly believes that Teresa is the catalyst to all of the upcoming trouble and things are going to get a whole lot uglier between these two women.

Do you think Melissa was a stripper? Should it really matter at this point? She and Joe have been married and parents for years now and she actually seems like one of the more stable housewives, wouldn’t you say? Would Teresa play nice while plotting against Melissa? Tell us your thoughts in the comments below!