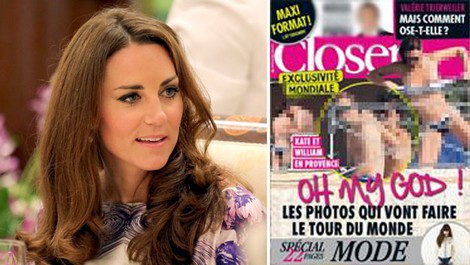 It seems the embarrassment that Kate Middleton is already feeling over topless photos hitting the press is about to get quite a bit worse.  While the British royals took legal action on Friday against the French publication that had originally printed the photos, now comes word that an Italian magazine is getting ready to print 26 new shots of the Duchess.  Chi, an Italian weekly that is published by Mondadori Group will bring its special issue to newsstands on Monday.

According to Yahoo news,  Laurence Pieau has insisted Closer– the original French mag that punished the first set of snaps has no regrets about printing the pictures. “These photos are not in the least shocking. They show a young woman sunbathing topless, like the millions of women you see on beaches. The fact that these are the future rulers of England makes the article more interesting and topical,” Editor Alfonso Signorini told reporters. “This is a deserving topic because it shows in a completely natural way the daily life of a very famous, young and modern couple in love,” he said.

It may be perfectly natural to be naked alongside of your husband but that doesn’t mean that the palace isn’t in a complete uproar over the scandal. Kate is protected by the family that she married into and they are appalled that her privacy has been violated and then put on public display

“Their Royal Highnesses have been hugely saddened to learn that a French publication and a photographer have invaded their privacy in such a grotesque and totally unjustifiable manner,” their office at St James’s Palace said.

Do you think that this new round of photos will hit on Monday as promised?  Should Kate have been more careful about being topless in the first place? I mean, I understand that she believed they were alone, but still the paps are always lurking!  Will the royals be able to make this scandal go away as swiftly as Prince Harry’s seemed to, or do you think it’ll get worse before it’s better? Tell us in the comments below!