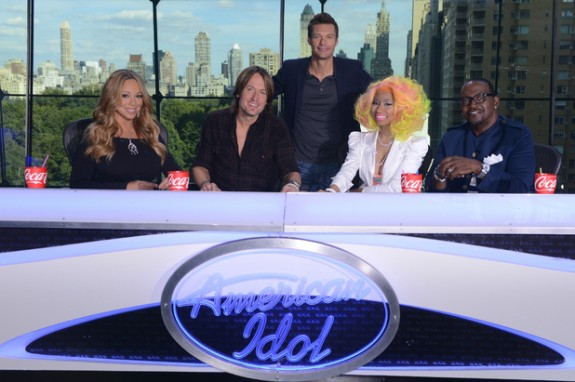 Though it may have only been less than 24 hours since the announcement was made that Nicki Minaj and Keith Urban were joining Randy Jackson and Mariah Carey on the American Idol panel, the judges didn’t have time to relax as they arrived in New York making their way over to the first set of auditions. Note, AI producers were in a rush to sign a contract with Minaj due to the show’s time schedule in filming scenes and auditions.

The picture which Mariah tweeted on her official Twitter page showed that Nicki and Carey weren’t going to be sitting next to each other like the way they have it on the X Factor. This could either mean that the two do not get along – as it was reported Mariah didn’t like the singer – or it’s because American Idol are just trying to do something different from other talent shows. Who knows?

Nevertheless, all four judges seemed rather happy to be there. Keith probably has the best seat – sitting next to the ladies – while Randy faked a smile, considering that he was fired but received a callback at the last minute since the Enrique Iglesias deal fell through. If that was us, we would not have come back… obviously they don’t want us so why come back jus because they couldn’t find anyone else. Ha.

Oh well – we just can’t wait to see the ratings for the new season.