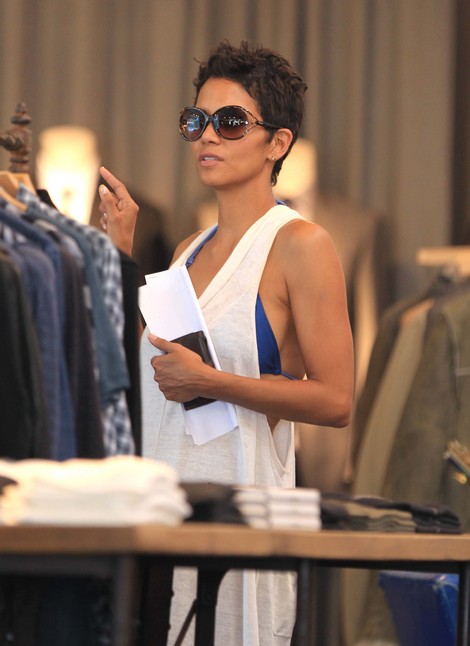 Custody battles are never easy and it appears that Halle Berry’s battle with ex, Gabriel Aubry, is nowhere near a resolution. The actress is supposedly leaving in dire fear for her safety in Los Angeles and has requested permission to up and move, with four-year-old Nahla, to France. The biggest hurdle here is the fact that the original custody report states that Nahla should not be separated from Gabriel, as her father plays a huge role in her life. The report also states that it would be of detriment to the little girl to keep her from her father, for long periods of time. Apparently Halle knows that her chances of being able to move from this country with Nahla aren’t very good and the whole situation is causing her to collapse emotionally. The National Enquirer says,

“Halle is paranoid and her nerves are as frayed as I’ve ever seen them,” revealed a pal. “She fears every camera flash that goes off in her face and sincerely believes she or her daughter is going to come to serious harm if the two remain in Los Angeles. “Friends are worried she’s going to fall off the edge. These horrible events are scary enough for Halle, but now that she is a mom, she feels both she and Nahla are targets. That’s why if a judge blocks the move to France, we all fear the worst. It could send her spiraling further downward.”

I fully understand trying to protect your child, but Halle can still do that in THIS country. I am pretty sure that there are plenty of places that she could set up a low key lifestyle for herself and Nahla. It is not absolutely necessary to flee the country as she is trying to do. The original custody report also lambasted Halle and Gabriel for not putting their personal differences aside in favor of co-parenting Nahla. This to me sounds like another attempt to keep a parent from their child do to an ugly split. Gabriel won the last round by maintaining visitation with Nahla and so now a furious Halle is trying another way to keep him from seeing her.

Do you think Halle is really at risk or is it just another ploy in an already ugly custody mess? Tell us your thoughts in the comments below!