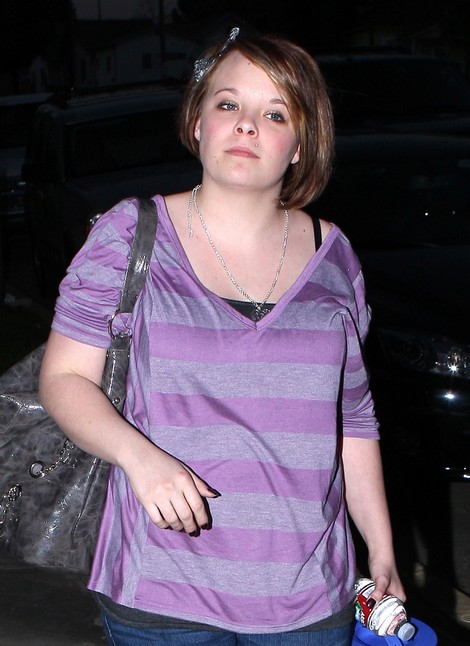 Sigh. I wanted to think that maybe one (just one) of the girls from MTV’s hit show Teen Mom, might make it out of the trappings of reality TV without being caught up in the seedier stuff. They all seem to end up hooked on drugs, in trouble with the law or having naked photos leaked by ex pals all over the internet. This time around it’s Catelynn Lowell who is making headlines.

Up until today she was heralded as a positive example as she triumphed over a childhood surrounded by junkies and then opted to give her baby up for adoption in order to ensure that the little girl would really be raised well. This morning TMZ posted a photo of what most definitely looks like Catelynn hitting a huge glass bong at a party last month. When her manager was asked to comment he would neither confirm nor deny, but his answer was quite telling none the less.

“Like many other young adults, Catelynn, at times, struggles with making the best decisions for her health and career. As her manager, I have strongly advised her to exercise good judgment at all times. She must learn from her mistakes. This will serve as a teachable moment in her development as a young woman.”

That leads me to believe that it most certainly is Catelynn in the photograph. Do you think this one very public misstep will damage her former positive roll model example? Do you think maybe it’s proof of where Catelynn really is at in her life and the beginning of a visual downward spiral? Could it be a one time thing, although she looks pretty comfortable with that bong, don’t you think?

Do you think Catelynn is like all of the rest of the Teen Mom girl’s and has just managed to hide it better? Tell us your thoughts in the comments below!