Another Victim For Kris Jenner: Penelope Scotland Disick To Appear On ‘Kourtney and Kim Take Miami’ 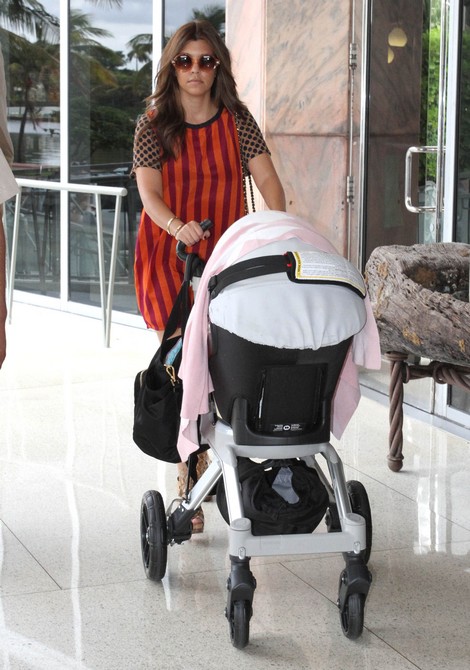 The latest season of Keeping Up with the Kardashians just wrapped up on a high note, the birth of Kourtney Kardashian and Scott Disick’s daughter, Penelope Scotland and it seems this family intends to do what they do best, keep filming. Momager, Kris Jenner, works very hard to ensure that her kids rarely have a break from filming and so their batch of reality shows tend to pick up one after another. Kourtney and Kim Take Miami is set to begin filming very soon and one of the new stars is expected to be baby Penelope. Some celeb moms choose to keep their babies and children out of the spotlight as much as possible in order to preserve a normal childhood for them, but not this family.

Kourtney is intending to have Penelope camera ready once filming begins. She’s already settled back into Miami and has both her baby and her son Mason in tow. No word of where her hard partying, irresponsible baby daddy might be.  Some sources say they are on the outs but then Kourt has indicated that it’s just not true. Regardless of their relationship status you can count on Kris making sure that Scott swoops in (to grab ratings) to spend time with his young family, even if it’s short term.

Another new addition to the cast is Kim’s cat named Mercy– named after Kanye West’s pet because Kim is never very original. It’s also rumored that Kanye will stop in and spend some time with his girlfriend too.

Are you looking forward to seeing Kourtney and Kim Take Miami or are you getting tired of the whole Kardashian brand? Tell us your thoughts in the comments below!