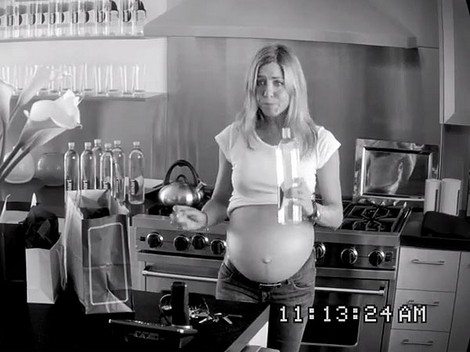 This time around, the creative forces behind those viral SmartWater videos decided to make it really personal for their star, Jennifer Aniston. The 2.5 minute clip is designed to look like black and white security camera footage taken from the stars own home and in each scene it makes fun of something that the tabloids have said about Jen. . In the first frame she is stepping into a sports car that she backs right through her garage door. She then goes into her kitchen and takes off a big Velcro band to reveal a very pregnant belly. She stands at the counter drinking as her belly hangs out.

The video also touches on her fitness freak side but instead of Jen doing the heavy lifting she is on her side being lifted by four guys. We also get a peek at Jen’s supposed room filled with wigs- varying lengths of the infamous “Rachel” haircut. As an again uber pregnant Jen takes the wig off her head to place it on a stand beside all the others she’s revealed to have short curly dark hair.

The most interesting scene of all takes place near a pool being filled with bottles of SmartWater. Out bops a grown man dressed like a little boy. She shoes him inside because she doesn’t want anyone to know that she’s with him- or his baby alien costumed brother. I have to wonder, is that supposed to be a Justin Theroux reference?  Is he the guy she’s appeared to be ashamed of? Hmmm.

Are you a fan of these videos? Personally I’d much rather see Jen sink her time into a really good film or television role. I kinda miss her from her Rachel Green days! Tell us your thoughts about the latest viral SmartWater video below!