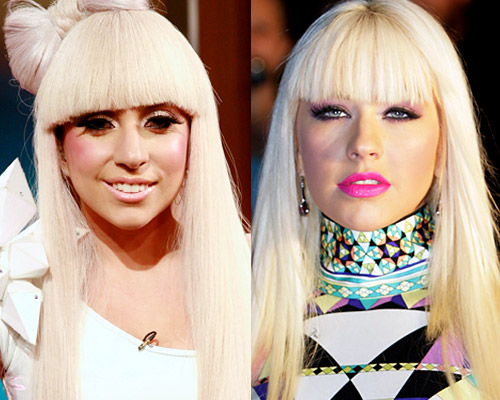 Lady Gaga has shown her love for Christina Aguilera‘s new song, Your Body, on her official Twitter page. Gaga who is currently on her ‘Born This Way’ tour took the time to congratulate Christina on her new single, adding that the old Xtina is finally back – whom she says she loved. So in other words, is she trying to say that Aguilera’s last album wasn’t the “real” Christina?

Well, it kinda makes sense, considering that a lot of people thought that the talent show mentor tried “too hard” to be like Lady Gaga on her sixth studio album Bionic – while its first single ‘Not Myself Tonight’ had the fastest fall in chart history. It holds the record in the UK for quickest jump from barely making the top 20, to suddenly landing out the top 100 charts. Nevertheless, she seems to have learned from her mistakes.

“@therealXtina just bought your new single. Seems the old Christina i loved has returned! Congratulations!! :)” GaGa tweeted. Meanwhile, Aguilera praised Gaga’s hard work in an interview back in 2010, saying: “She works her ass off, which we all do as women in this business and it just sucks that as women we have to deal with that sort of comparison thing that men don’t necessarily,” Aguilera said.

Christina Aguilera’s new single ‘Your Body’ is currently no.4 on the USA iTunes top 10, while it is expected to receive an international release sometime this month.