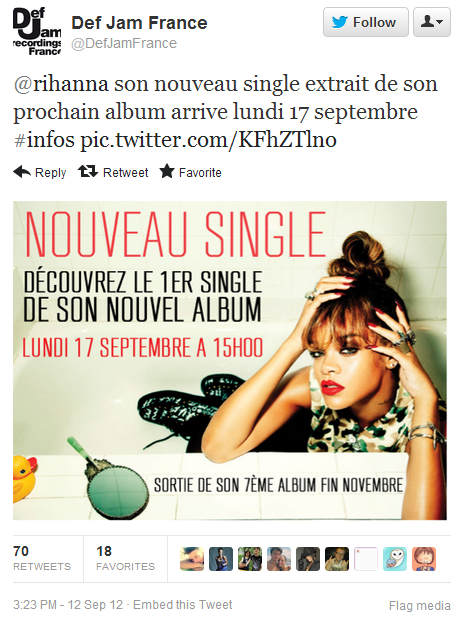 Rihanna – the alleged hardest working woman in showbiz has pushed back the radio release of her newest single, which is yet to be given a title. The news broke last week when her label Def Jam released promotional posters for the new song, confirming the song can be heard from Monday (yesterday). But, it seems that her team changed their minds as it’s been pulled for at least a week.

“We were notified that #Rihanna and her staff decided to delay her new single. It should premiere later this week,” Benjamin Galouye, a music programmer at French radio station NRJ confirmed. Sia Furler, who allegedly worked with the singer on the upcoming single, later tweeted: “Next Monday should feel pretty good.”

So, don’t worry – you’ll most likely hear the song by Monday. Rihanna has also been nominated for a whopping 6 nominations at this year’s MTV EMA’s, where she’s expected to perform the new single, followed a world tour in March. She confirmed that the tour name will be called ‘Diamonds’.