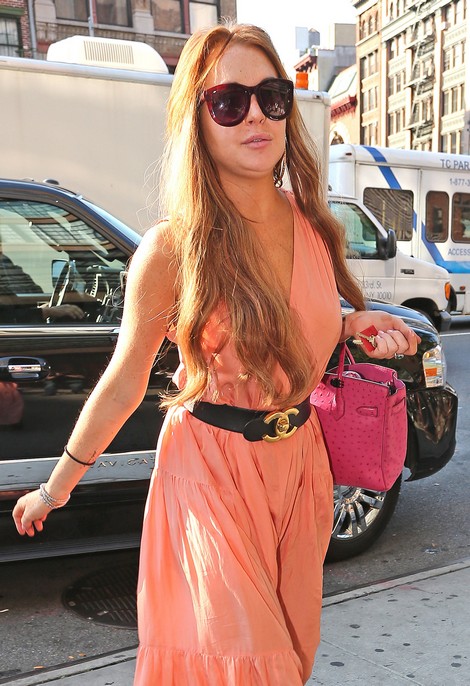 Lindsay Lohan was arrested this morning in New York City, nope she did not steal anything this time.  Instead Lindsay hit a pedestrian and left the scene of the crime in Manhattan, New York City.  Wasn’t it just yesterday Lindsay was complaining because she goes to jail and Amanda Bynes does not, LOL?

TMZ has the scoop on the story: Law enforcement sources tell TMZ, Lindsay was pulling in to park her Porsche Cayenne near the Dream Hotel in downtown NYC when — at a very low speed — she allegedly hit the knee of a 30-something year old guy. That was around 2AM ET. We’re told one of Lindsay’s passengers in the SUV got out and checked the car for damage … and then LiLo and co. went inside the hotel.

Lilo was parking her Porsche Cayenne near the Dream Hotel and was not driving very fast when she hit a pedestrian in the knee.  A member of her entourage checked for damage and then Lilo got out undisturbed by the incident and went into the hotel.

When Lindsay came out of the hotel later she was arrested for leaving the scene of an accident.  Nothing new here for Lindsay.  Reports claim no alcohol was involved.  Meanwhile, although the pedestrian was taken to the hospital he was not injured.

It will be interesting to see how that all plays out because Lindsay is on probation and she is suppose to keep the peace.