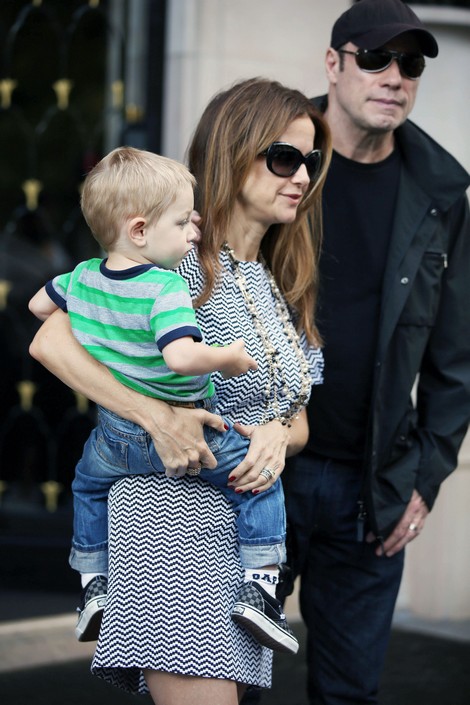 Totally heterosexual John Travolta has decided to take his long, tormented wife on a second honeymoon in Paris. But nothing quite screams ‘I’m not gay’ then to take your wife to the most romantic city in the world, the city of lights. Although I’m pretty sure they have been on vacation before, but maybe not since news of his many gay trysts have rocked their marriage.

“John put on a great performance as a doting husband, but just about anyone could see how hollow it was,” an insider tells The Enquirer. “And the strain of the ongoing scandal is obviously taking a terrible toll on Kelly, she tried to seem excited with all of John’s surprises, but she looked thin and tired.” Said the insider. “Clearly, the emotional damage from this gay scandal is pilling up.”

Please, both Travolta and Preston are so far deep in the so-called religion Scientology that neither one of them can get their heads out of asses to see how it’s affecting the other. Preston seems to enjoy playing happy wife since it seems her eyes have been closed of this matter. Travolta even did the trip as a distraction with news about to come out that Doug Gotterba has been having a six year long affair with Travolta. So another affair will be brought to fruition?

The Enqiurer’s interview with Gotterba brings to light Travolta enjoyed multiple sex partners and even wanting to make a sex tape. To make matters worse for Preston, Travolta reportedly told Gotterba he liked men better than his wife, even after marrying her. Obviously Travolta is gay. There can’t be so many rumors of one thing over the years without them being partly true. So, maybe I’m wrong, maybe he’s bisexual. Preston seems to have blinders on, she like’s the money and the life she has. Maybe Preston doesn’t feel the need to be actually loved by her husband, just Travolta buying her expensive things and vacations are what she needs. Or maybe not.

“John’s finding out he can no longer outrun the scandal,” explained the source. “Meanwhile, Kelly bravely puts on that gorgeous smaile when she can, but in private she’s shed many, many tears and the heartache is really beginning to show.” Until I see a report that Preston has actually filed for divorced, I will be ever aware of the hold of Scientology.