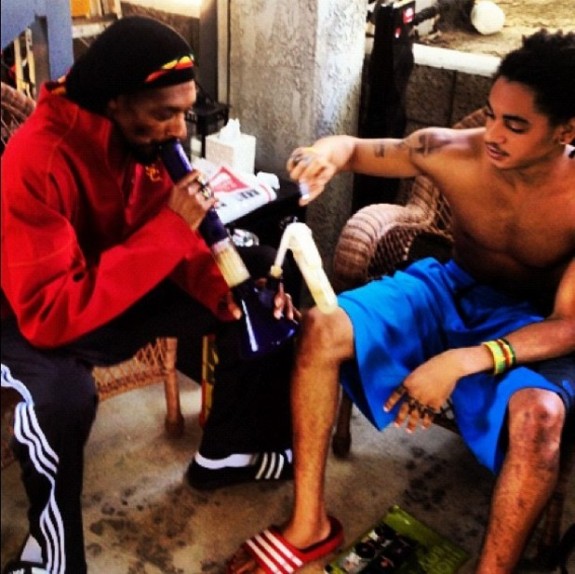 Snoop Dogg is making headlines again as he smokes the bong with his oldest son, Corde. The 18-year old, who still lives with his mother and father, along with his brother and sister, seemed to have grown up a lot since we last saw him on E!’s Snoop Dogg’s Fatherhood. Nevertheless, in the pictures that he posted on Twitter, he shows himself lighting his dad’s pipe, while another pic shows him getting in on it.

Bad father or good father? Judge after you hear this. So, Corde reportedly turned down a scholarship he received in football to pursue a career in the rap industry, despite the fact that he’s been training to be a professional football player for more than 8 years. The offer was “easily turned down” a source said, before adding that Corde has so interest to study at college – he wants to be a rapper like his dad.

Following the pics on Twitter, he wrote: “PUREmorning.” Soon later, he tweeted another image with the caption: “Wouldnt mind livin in Amsterdam Fo a year. #CaliDoed.”

Now, what do you make of this?!