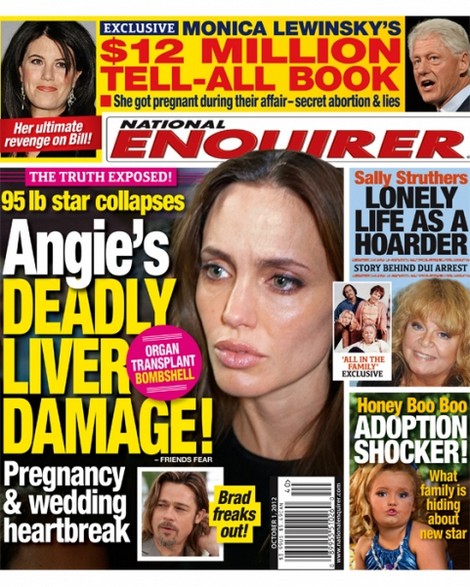 The current cover of National Enquirer features the shocking cover story ‘Angie’s Liver Damage – the 95 lb Star Collapses.’  WOW, this one is a whopper even for NE! The magazine claims that Angelina Jolie who they say is 95lbs has collapsed from deadly liver damage.  One has to assume that the liver damage is a result of her alleged drug use.  In 2010 Angelina’s reported drug dealer told Life & Style magazine that she used cocaine and heroin throughout the 1990’s.   Jolie has admitted to drug use in the past, saying: “I’ve done coke, heroin, ecstasy, LSD, everything. I gave them up long ago.”

The magazine goes further and claims that her liver is so bad they are looking into organ replacement and poor Brad Pitt is totally freaking out.  Of course this news put the wedding on hold.  Angelina and Brad were rumored to be thinking of adding another wee one to there tribe.  Clearly, if this story is true then everything is on hold.

The magazine claims they are exposing the truth this week!  What do you think fact or fiction?  Is this NE making groundless speculation again to sell magazines?