Pink Says If She Wasn’t Planning Her Upcoming Tour, She’d Be Probably Be Pregnant Again 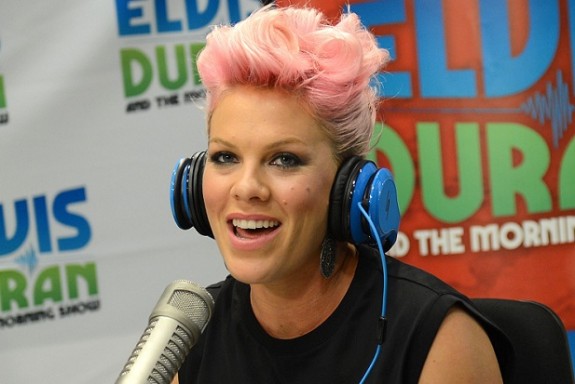 P!nk has just released her latest studio album The Truth About Love, followed by a world tour early next year, which she says is one of the reasons she is not planning to get pregnant right now. The singer who already has a daughter named Willow by husband Carey Hart says that if she wasn’t doing all the things she has planned, she’d probably be pregnant by now.

“I mean if I weren’t going, getting ready to go on tour, I’d be pregnant. I’m barefoot and pregnant in my garden with an attitude.”

The ‘Blow Me One Last Kiss’ singer added that during her pregnancy last year, she became very angry – to the extend where she describes the experience being like the movie 28 Days Later. Pink explained: “They were infected with the rage virus and that’s what I had. I didn’t battle morning sickness, I didn’t have cravings. I had rage!”

Joking on breastfeeding her daughter Willow until she’s a teenager, the singer added: “I’m a hippie at heart. [How long will I do it?] Until prom! I’m going to carry her to prom in a Baby Bjorn. ‘Willow, your feet are dragging’,” while she talks on her hubby: “He’s amazing. He’s exactly the dad I thought he’d be. He was raised by a single dad, so he’s completely capable. Sometimes I feel like if I didn’t have the boob, I wouldn’t be necessary!”

So far, here are the confirmed details of where Pink will be heading first for her world tour:

Pink On Relationship With Carey Hart: ‘Our Marriage Will Never Be…