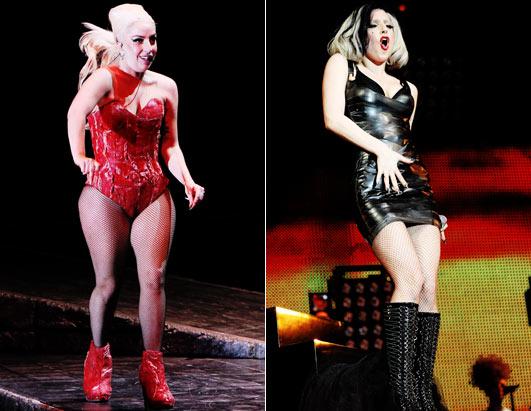 Lady Gaga has said that her recent gain weight has been coming from eating her father’s italian food – which she describes as “amazing.” Fans have speculated that the singer was pregnant after showing off a much fuller figure during her recent shows on her Born This Way tour, but hinted in a recent interview that it’s definitely not from getting knocked up by boyfriend of one year, Taylor Kinney.

Speaking of her father, Joe Germanotta’s restaurant to where he serves the best pasta food, the singer told radio host Elvis Duran: “I love eating pasta and I’m a New York Italian girl. That’s why I have been staying out of New York. My father opened a restaurant. It’s so amazing… it’s so freaking delicious, but I’m telling you I gain five pounds every time I go there.”

It looks like Gaga isn’t happy with her weight gain either, adding that she’s already on a diet to lose a few pounds after packing on 25 pounds over Christmas – and that weight seems to not have gone anywhere. She said: “I’m dieting now but my God, I think I gained, like, 25 pounds (1.8 stone) over Christmas.”

Meanwhile, celebrities such as Fashion Police co-host Kelly Osbourne suggested that the ‘Edge Of Glory’ singer has definitely got something that stomach – and she’s not talking abou italian food: “I think she is pregnant because she has been covering up this part of her body recently and I have been noticing that a lot.”