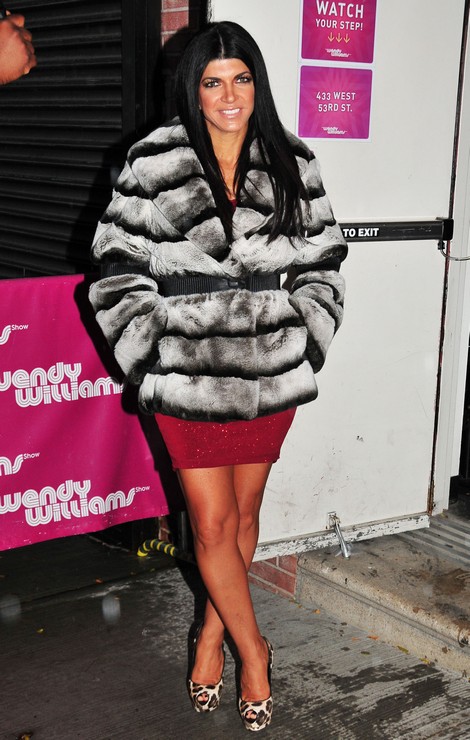 It’s a really good thing that Teresa Giudice is so very strong- I mean she tells us all the time on camera, right?  Well, she’s going to need that inner strength right now because she sure as heck has lost the support of the entire Real Housewives of New Jersey cast in no time flat.  She has always hated her sister-in-law, Melissa Gorga, going so far as to blame her for the lousy relationship that she had with her brother. Teresa never gets it that if you insult a mans wife, he’ll have little use for you even if he is your brother!

Teresa recently encountered a man who claimed that Melissa worked as a dancer at his club, Lookers, years ago. She has been waiting for an opportunity to really stick it to Melissa and so she quite obviously arranged for this guy, Angelo Vrohidis, to have a (not so) chance meeting with her.  She wanted Melissa to feel uncomfortable and in that moment Tre looked pretty unhappy that Melissa handled it all so well. Melissa claimed not to remember exactly where she knew Angelo from but her eyes told a different story. She kinda looked like her past was about to hit her between the eyes.

While all of this went down Jacqueline Laurito was receiving texts from a friend who had overheard Angelo say that Teresa wanted him to embarrass Melissa. It all got ugly and after last night’s episode it was revealed that the entire cast has severed their ties with Teresa and her family.

Twelve hours after this pivotal episode aired good old Angelo decided to talk to the press and according to Celeb Dirty Laundry, he confirms a set up.

‘Angelo Vrohidis bragged that Teresa knew about Melissa’s stripper past and that he appeared on the hit Bravo show because “Kim and Teresa want to blow the whistle on her.  They had me do this thing, ya know…’Melissa! Wow, I almost didn’t recognize you. You look fabulous!’” he said. During the encounter at the fashion show Melissa claimed she couldn’t remember where she knew Angelo from, so Teresa cornered her in the bathroom wanting to know the truth — even though Angelo claims she was in on it.”

Of course Teresa orchestrated this whole public fiasco! Things always happen when she has the biggest audience possible. She thrives on the attention of tossing a grenade and then ducking for cover as the damage spreads.

Are you surprised by the dramatic turns from last night? Tell us in the comments below!