‘He Knew I Needed Company’: Kim Kardashian Says Kanye West Bought Her A Kitten While She’s Away 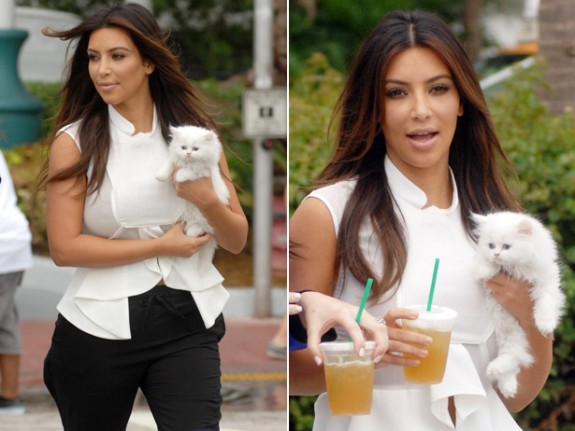 Kim Kardashian has been dragging a little white kitten with her for the past two weeks, since flying out to Miami with her sister, Kourtney Kardashian, as they film their spinoff show Kourtney and Kim Take Miami. Seeing that Kim is keeping herself busy, thanks to her mother who’s booked an incredible amount of jobs for the reality star – including one that had her fly out to Australia for a week. So, boyfriend Kanye West felt it would be nice to give Kim some company whilst on her business trips – buying her a kitty.

“So happy you guys met Mercy,” she wrote on her blog. “I’ve wanted a white Persian kitty for a long time. Years!” She goes on to tell her fans who bought it for her: “With me being in Miami, Kanye knew I would need some company when he wasn’t around so he surprised me with her. She’s so sweet and the cutest thing ever!!! Xo”

Meanwhile Khloe Kardashian, who also joined her sisters in Miami for a couple of weeks, wrote on her blog that she’s also in love with the little kitten: As I’m sure many of you have heard, Kim was greeted with the cutest face you’ve ever seen upon our arrival in Miami — a White Persian kitten named Mercy. Kanye got it for her as a gift and we are all madly in love! How cute is she?! I might have to sneak her in my suitcase when I head back to LA… LOL

E! have released promos, confirming that the new spinoff show will debut sometime in January. An official date has yet to be given.