Miley Cyrus Is In Bed With Ashton Kutcher – Why? Read Below To Find Out! (Photo) 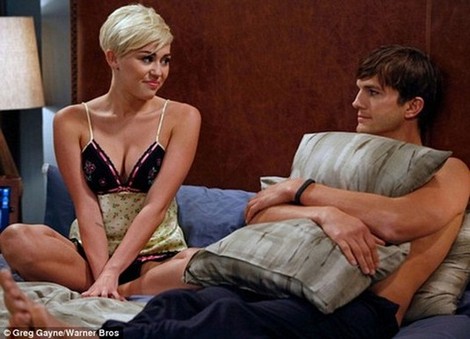 Miley Cyrus in bed with Ashton Kutcher is not a nightmare, nor is it the drunken details of another scandal. A new RadarOnline.com article has exclusive revealed the snaps from Ashton Kutcher’s Two and a Half Men, where he frolics with the pixie-cut Cyrus while he holds a pillow in front of his body. She has a guest starring role on Charlie Sheen’s old show. According to the report, Cyrus’ character will be named Missi and she’ll be wearing the sexiest outfits since the tooth fairy donned those designer garbs. Included in the dress-up package – “a black lace baby doll top, a revealing orange bikini top and several pairs of Daisy Dukes”

We have to admit, even though we’re not her biggest fan, she looks sizzling hot in the screen caps. Jon Cryer, who won an Emmy for Best Actor in a Comedy Series at the recent Emmy Awards, spoke backstage about Cyrus and her time on the set. “She was lovely,” he said. He was asked about Cyrus’ brand new hairdo and said, “I think she looks fantastic!” We think Cyrus looks like a completely different person and if this is her way to shed the Hannah Montana image, she sure as hell pulled it off! Cryer spoke about Cyrus’ time on set, “They gave her page-long monologues, and all week she was on book with them…Then we did in front of audience and Miley brought it…Then I remembered she was hatched in Disney labs in Burbank and grown for just this sitcom situation.”

Cyrus’ episode will air on the 17th of October on CBS. Many television critics believe this might give a massive boost to the dwindling audience numbers the show is suffering from after Sheen’s departure. Will you be watching Cyrus’ appearance on the show? Do you think her career needs this kind of exposure? Let us know your thoughts in the comments below.