JWoww Talks Engagement To Roger Mathews: ‘I Freaked Out’ 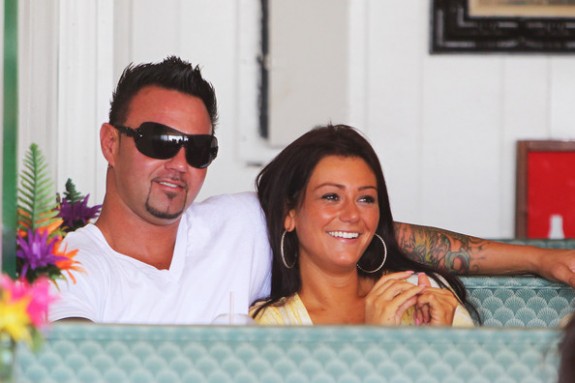 JWoww has confirmed her engagement and has finally spoken out about how boyfriend Roger Mathews popped the question – and no, it definitely wasn’t the traditional by getting on one knee. Whilst jumping out of a plane as the two were skydiving, Roger felt that exact moment was the best time to propose – meaning he’d have to wait several minutes til he gets an answer (considering that they are in mid-air).

JWoww has said that she was freaking out upon seeing the sign: “[After jumping] I look over and see a handwritten sign [saying], ‘Jenni, will you…’ and then I turned to him and freaked out,” she told InTouch. “The whole time I’m screaming, ‘What are you doing? What’s going on?’ He’s like, ‘I want to spend the rest of my life with you! Will you allow me to?'”

Best friend, Nicole ‘Snooki’ Polizzi beat JWoww to it, when she got engaged to Jionni LaValle back in March. No weddings have been set for either of the two, so now we’ll be wondering who will be walking down the aisle first? Jenni or Snooki?

Oh – and don’t you agree that it was a good move for MTV to end the show? Look at all the positive things that are happening in these people’s life now. They don’t need to act up on television, acting crazy and goofy while out clubbing. It seems that the two girls have definitely put that chapter in their lives behind them and are looking to have a bright future.