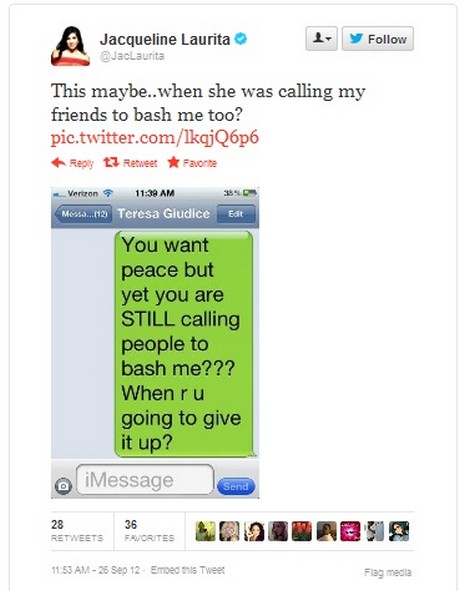 I’m so happy to see that The Real Housewive’s of New Jersey’s Jacqueline Laurita not only has seen the light, in terms of Teresa Giudice’s capacity for evil, but she’s now smart enough to protect herself!  On Wednesday Teresa sat for a dicey interview with Anderson Cooper and of course tried to deflect some of the heat that she has been taking this week.  As usual, Teresa deflects by playing the poor-me victim that everyone is against. If I had a nickel for every time that Tre has claimed to have done “nothing” to a cast member, when we already know just the opposite, I’d be able to buy her Jersey mansion out from beneath her.

Teresa decided to lash out a bit and make Jacqueline her target (this week) telling Anderson that she has received threatening texts from her former best pal and that if the harassment doesn’t stop then she’ll go to the cops. Jacqueline saw the footage and responded via twitter saying,

“Teresa shouldn’t go on TV to say I’m threatening her unless she wants a defamation suit against her” tweeted Laurita. “I’ve tried2get her to stop& she doesn’t. Let’s make a deal @teresa_giudice I won’t interfere in your life if you’ll stop interfering in mine. Lets keep each other’s name out of our mouths.”

She then took it a step further and began tweeting a few of the supposedly threatening texts that she sent. The most pertinent being right after footage aired of Joe Giudice calling his side dish while miked. He completely disrespected Tre and in spite of their no longer being friends, Jacqueline reached out to her with a bit of empathy saying,

“Fighting aside… I’m so sorry that you are having to deal with that scene with Joe so publicly.”

I’m going to wager a bet that it’s the last time she ever offers a kind gesture towards Teresa, don’t you think?  Isn’t Tre disgusting for taking such an unnecessary kind text and turning it into grounds for drama? Tell us your thoughts below!