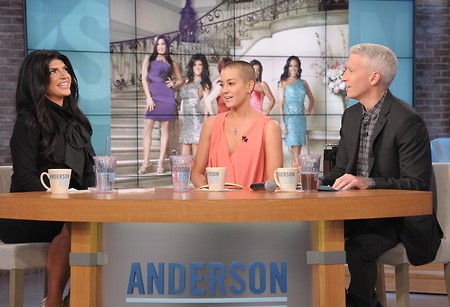 This chick is a real piece of work. Of course I’m talking about The Real Housewive’s of New Jersey’s Teresa Giudice. She seemed to work overtime this past season to cause conflict amongst all the housewives and in the end, it left her completely alienated. These ladies hate her! Caroline Manzo was finished with her in early episodes because Teresa kept planting stories in the press and getting paid for it. Cousin, Kathy Wakile felt completely snubbed by Tre and found herself doing battle with her when they did speak. Then came strippergate, where Teresa very obviously played a role in setting up her sister-in-law, Melissa Gorga. Whether or not Melissa was ever a dancer has become totally irrelevant. No one cares. It’s the fact that Teresa aimed to embarrass her so publicly that has made this story soar. By the reunion show Tre had it out with former bestie, Jacqueline Laurita. Over the course of filming Jacqueline’s eyes were finally opened to how horrid her friend was and how she used her just like everyone else.

The reunion show is a blowout session and when confronted about her lousy treatment of- everyone- Teresa had this to say according to Us Weekly,

“I’m Italian, I’m very emotional,” she told Us. “What you see with me is what you get. I don’t lie and I think if you followed me from season one, you see who I really am. Anybody that’s watched me from season one knows me, and you can tell if I’m lying or not. Why would I set her up? What would I get out of it? She’s already married to my brother, they have three kids.  I can’t get her out of my life. Once you have kids that’s it. What would I gain from it? Why would I want to set her up?  This is my thing,I don’t hold grudges, meaning Ill always forgive, but I’ll never forget. Like if I see her, of course I’ll be cordial, but I’ll never forget. That’s how I am.”

Isn’t she nice? After throwing a grenade in your face she doesn’t blame you for being angry! She won’t hold a grudge!  What a crazy b*tch. Do you think Bravo’s producer’s are dying to get this crew back together for another season? Do you think the ladies will even consider filming with Teresa? Tell us your thoughts below!